Workshops and events ran by local artists were hosted in the shop space or at site-specific locations for 6 days a week for over a month.

Round the Public Houses: Walking around the locality mapping Penryn’s lost public houses

A walk discovering where over 15 pubs once stood. Guided by Chaz Wemouth, ex-landlord of the Anchor and expert on local history.

These two events invite you to think creatively about the landscape of Penryn through focusing on places of social gathering, (hi)story telling, entertainment and exchange. On foot and in the pub, we’ll be mapping Penryn’s lost public houses and identifying future visions of social spaces in 50 years time. If you are passionate about your local pub or social space, interested in beer and the revival in brewing local real ale, or fascinated by the rich cultural heritage of the town and the role that Penryn’s pubs and inns continue to play in it, these events are for you.

Exploring different ways to embed stories from the Local Women’s Institute into textiles. Touch Craft develops electronic textiles or e-textiles that use embroidery to create soft, familiar surfaces that have been enhanced with sensor technology, sounds and vibrotactile effects. http://touchcraft.org.uk/

From the 3D Digital map of Penryn, we created a 3D wooden elevation from the digital model using a laser cutter, creating a giant puzzle that residents then put together. Created by Iain Griffin at Plymouth University

An informal Time to talk , have our cake and eat it!

Cakes were baked by different residents. From the traditional Heavy Cornish Cake, by a resident born in Penryn, to extraordinary chocolate day of the dead gateaux made at the local artisan café. Images of these cakes were placed onto the Map according to where they were baked. Event led by Ruth Pethybridge

Now and Then (The Other Penryn) Collage workshop .

A series of playful collage and drawing session exporing the geography and stories of Penryn. Mixing fact and fiction, residents added their  ideas to new and old photographs of the town. The workshop asked: “Is there another Penryn that could exist if the past was different?” These collages were placed onto the map according to their location and some were selected to turn into 3D models Led by Maria Christoforidou

Create a sound map of Penryn that you can hear whilst wandering around the town. We will be using the Penryn Museum’s  sound archive of past memories, your own new recordings of now and learning how to use QR coding technology.

If you could send a message to your town, what would it be?  Is there a memory or idea you have that relates to a specific spot in Penryn? Drop in to and decorate a flag  with your message or memory to then be placed around town identifying its specific location.

Introducing residents to the potential of drawing in VR. Another way of re-imagining Penryn through drawing in VR.Led by Becalelis Brodskis using Tilt Brush and the VIVE head set.

A community group, Hand up Penryn, facilitating local voices to be heard and moving forward the development of Pemarin Park. We visualised in 3D the 2D architects drawing and hosted a day of activities relating to the park

Spot yourself at the Penryn 750 fair day

InterAnima has been given a film of the Penryn 750 Fair day to restore. Are you in it or do you know some one who is? Drop in and tell us about the day or the person you know who was there but may have moved on. We will then create a new film about then and now. 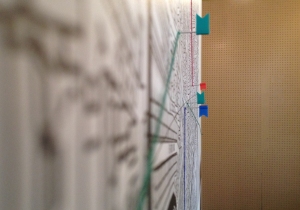 A creative, contemporary photographic audit will map aspects of the physical environment of Penryn Town Centre in its 800th year. Assist local resident Megan Beck in compiling visual information about Penryn in 2016 by suggesting what you think should be photographed.

An demonstration of buildings and other re-imagined content in the Re-imagine landscape of Penryn being printed on a 3D printer.  This is the Town Hall

A 3D digital replica of Penryn’s landscape  has been created. A virtual reality but with buildings taken off. A landscape waiting for you to map on to it your memories, your observations of now and your visions for the future. A map of your Penryn created by all of us.